The number one reason your haunt’s marketing Isn’t as effective as it could be! 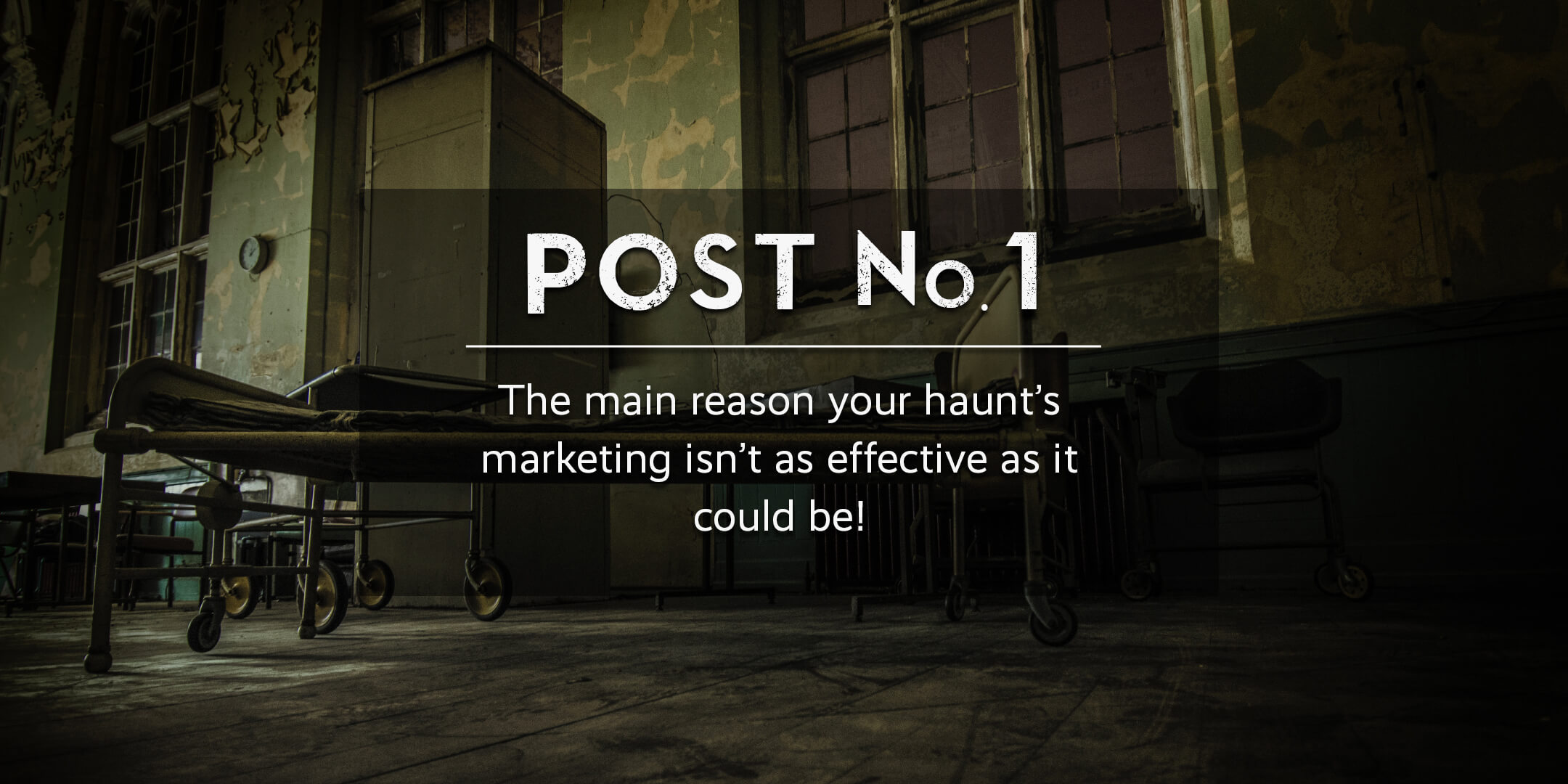 To start, I want to focus on a core principle that if implemented will increase the effectiveness of your marketing campaigns considerably: STANDING OUT. That may sound simple and obvious on the surface, but I assure you there is more to this concept than meets the eye.

In order to dive in we have to first do a quick, surface level look at who is actually going to haunts. (I will definitely dive into this more in depth in a later post.) The largest group of people going to haunts is just the general public who wants a fun thing to do with their friends to celebrate the fall and Halloween season. (Sure, there may be exceptions but in general this is the case.)

How do these people find your haunt or any haunt? These people are NOT haunters. They are not in this group or your local haunt group.They are going to find your haunt by either 1) asking a friend to recommend a haunt to them, 2) hopping on Google to find haunts near them and / or, 3) if you’re lucky, they may receive your Facebook ad or see your billboard etc.

Because these people are NOT haunters they don’t think like haunters. If you ask the average person what they think of when they think of a haunt, you’re going to get back answers that seem foregin to you. They may or may not have even been to a haunt before. To them it’s not that serious. So why am I taking the time to break all of this down? Well, because with that info we can now get to the meat of this concept.

Picture this person, with loose interest, just looking for where they should go on an October night with their friends. Let’s say they Google “haunts near me”. They will browse your website, your social media, check out some of your pictures, watch a video or two, read a review and then repeat this process with the next 5 haunts down the list. What this person is looking for is a haunt that STANDS OUT TO THEM.

It’s tough, but ask yourself “does my haunt stand out from the other haunts in my area?”
Of course, your first thought is going to be to say “absolutely, hell yes it does!” and you’re going to get offended that I would even ask such a thing. You’re going to tell me that your “rooms are amazing, your actors are THE BEST, you spent thousands of dollars on new state-of-the-art props, you have been crafting this season’s story since November 2018 and that every year your guests say you guys have stepped your game up by leaps and bounds!”

My response is going to be this: “That’s awesome! I believe you when you say those things, but, what steps have you taken to actually demonstrate a single one of those things to the public?” I genuinely believe that if someone makes it to your haunt they are going to have a great time. Everything you have to offer will resonate with them, but none of those things MADE them come to you in the first place.

We have to really get into the minds of these people and see it through their eyes. Are your videos just quick snippets of creepy stock footage with some text info and a VO? Maybe your haunt did a video shoot showing off your ghouls in, again, quick snippet vignettes? The reality is, so did every other haunt. Even if your video is better than those other haunts’ videos, It’s still the same video.

Does your website make the process of learning about you and buying tickets as easy as possible? Does it look any different or work any better than the haunt down the street’s website? Is your website mobile friendly? Does it look like it’s from 1995? This alone can send people on their way to another haunt. Would you take the time to navigate through a website that was giving you nothing but trouble?

All of this being said, I won’t leave you high and dry. I’m here to help, and here are some ways you can separate yourself from the pack.

One of the best ways, as guys like Scott Swenson are big proponents of, is the story of your haunt. The haunt down the road won’t have your story and story is EVERYTHING. That story you have planned since November 2018, USE IT! Put it in your social media posts, ads and videos. Make sure your photos are of characters FROM your story. Everyone loves a good story, even these people. The more you call back to that story, the more it will resonate with them. When the choice is between engaging with your story and being immersed in that world or seeing some creepy stuff down the road, which do you think they are going to choose? Which would you choose? It’s not enough to just tell that story at the haunt and certainly not enough to just have a page on your website with it written out.

Another way to differentiate yourself is to focus on an element that more often than not is overlooked – FUN! Show people that your haunt its not ONLY scares but also something they can make a night out of. Do you have food, games, activities, escape rooms, etc.? Most people have at least one of those things if not all of them. Communicate this on your website and social media. It’s not enough to just list it out on your website. Specifically tell people that coming to your haunt is something they can make a night out of. Show Johnny in the food truck making that burger – hell, even call it a “zombie burger” or something relevant to your story. Get that interview with the father who says “we played all the games and it was a lot of FUN!” or the teenage girl who says “It was great, we all got to laugh at Jennifer as that clown kept taunting her.” People want to have a fun night out with their friends. Show them that you are aware of that, and that you are happy to provide that experience. This is the entertainment industry after all.

I hope this gives you some insights and some concrete things that you can take away as we move closer to the season. Whether you agree, disagree or have more ways to make someones haunt stand out, I’d love to hear your thoughts in the comments! Feel free to also let me know what topics you would like me to write about in future posts.

The next post I will be putting out is going to be titled “If you aren’t tracking your campaigns correctly, you’re losing way more money than you think each season.”

If you want to get that early before I post it here or just want to be notified as articles come out, feel free to join my Facebook Messenger list by subscribing to my chatbot here: *insert link* Just follow the prompts to subscribe.

Hi, my name is Alex Berland and I am the CEO / CMO & Co-founder of Conjured Media LLC. My goal with this blog is to provide a unique, marketer's perspective for haunt owners, haunters and business owners a like. I'd love to hear from you! Feel free to message the Conjured Media Facebook page with any questions or feedback.

Protected: If you aren’t tracking your campaigns correctly, you’re losing more money than you think each season!
August 18, 2019
Go to Top